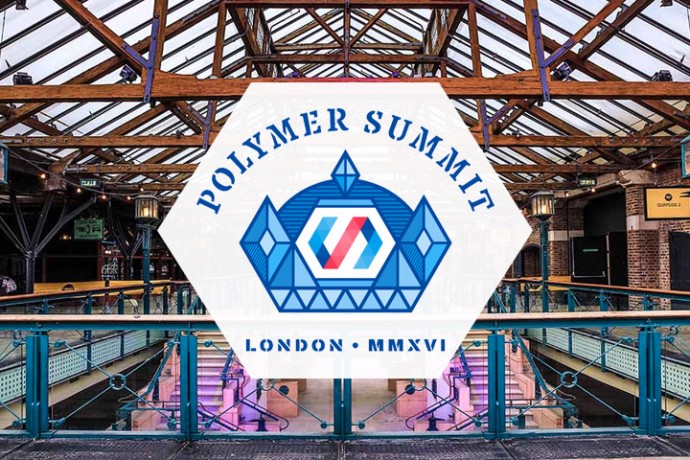 In case you missed it, Jacit had the pleasure of attending this year's Polymer Summit (2016) which took place last week in London. It was a two day event welcoming web developers from all round the world and was crammed full of talks, code labs and the latest announcements from the Polymer and Google team.

If you’re unfamiliar with the Polymer Project it’s an open-source project, developed by the clever folks over at Google, which aims at unlocking the web platform’s full potential. Basically the Polymer Project offers libraries, tools and patterns to help developers build modern PWAs (progressive web apps) which utilise cutting edge features such as web components, service workers and HTTP/2. A key focus of Polymer is to take a step back and rethink the use of heavy libraries and frameworks and instead take a more platform-centric approach to building web apps.

So after registration (which went surprisingly smoothly) and breakfast, day 1 kicked off with the Opening Keynote from Taylor Savage who delivered a brief overview of what to expect during the two days, and gave us a great insight into the current state of web development, web components and the Polymer Project in general.

Following directly on from the Keynote was Ben Issa who gave a fantastic talk about how companies such as IGN are currently using web components to build beautiful experiences for their customers.

One of the most entertaining talks of the day was ‘Practical Performance’ by the double act Sam Saccone & Paul Irish who examined methods for identifying why a website is slow using tools and techniques based around the PRPL (push, render, pre-cache, lazy-load) pattern. You may have heard the term PRPL (pronounced “purple”) before if you caught any of the Google I/O conference earlier this year. If not, the PRPL pattern is designed to be an amazingly efficient way of delivering PWAs and web apps to users.

The PRPL pattern stands for:

For more info on the PRPL pattern check out this article by Addy Osmani.

After many other great talks, day 1 ended with the After Party which gave us the opportunity to meet other web developers as well as the Google engineers who are currently using and working on the Polymer Project …the free beer and cocktails weren’t bad either!

After breakfast (and several cups of coffee) day 2 started with a talk from Justin Fagnani who went into great detail about the new developer tools which are available in Polymer.

For me, the most interesting talk by far came from Alex Russell who examined the truth behind mobile web performance and the harsh limits imposed on mobile CPUs by batteries and thermal throttling.

There were many things covered in this year's summit, however two things which particularly stood out, possibly because they were embedded into almost ever talk, were the PRPL pattern and #UseThePlatform. The idea behind #UseThePlatform is based around using the modern web platform to its full potential rather than relying on heavy frameworks and libraries which can be costly in regards to efficiency. It was made clear by many of the speakers that frameworks do still have their place in modern web development, however they can and should be a lot leaner, which we wholeheartedly agree with.

We'd like to finish by saying a huge thanks to all of the speakers and everyone involved for making this year’s Polymer Summit such an amazing event! It’s genuinely exciting, and also motivating, to see the positive direction which the future of the web is heading. It was also a great experience meeting some of the people involved in the project as well as other web developers from around the world.

As an agency we have used an earlier version of Polymer (v0.5) in the past and although our initial experience wasn’t great, I think a combination of this year’s summit and the soon to be released version of Polymer v2.0 has made us very excited to give it another try. In fact, we're so excited that we already have 2 projects lined up!

If you want to see more highlights from the Polymer Summit 2016 make sure you check out the Google Chrome Developers Youtube channel.