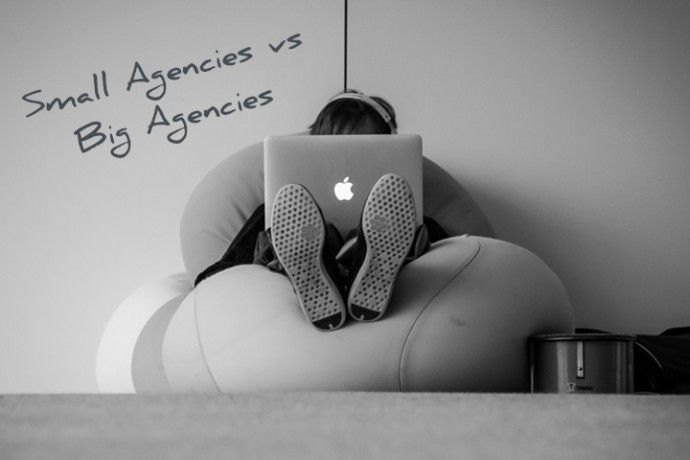 Traditionally big brands have sought after big agencies to take on their online creative projects, but more often than not they’ve come to realise that amongst the premium price tag, lengthy processes and detached account managers, they’re left feeling dissatisfied and somewhat defragmented from their original goal.

Don’t get me wrong big web agencies know what they’re doing and they have rules and processes in place to make sure of this, but herein lies the problem. Strict rules and processes often breed repetitiveness and complacency, which can hamper creativity. Small web agencies on the other hand are more flexible and are able to tailor their services to the client’s needs. They are also able to streamline a lot of the processes as the client usually deals with the designers and developers directly, rather than having to deal with layers of account managers and executives.

The nature of big web agencies also means they have large overheads, which in turn means they are usually driven by targets and figures rather than the appetite to create new and innovative websites. Small boutique agencies on the other hand aren’t bound by the same constraints, which means they are driven by their hunger to constantly push the boundaries of their work. They also know that to survive they have to deliver a consistently high level of quality each and every time.

It goes without saying, small boutique web agencies aren’t for everyone. Some companies simply like the feeling of having a big agency, with dedicated departments, handling their work and big agencies do have a competitive advantage in some situations. For large international campaigns big agencies have the resources and power to tackle the project straight away, whereas smaller agencies may have to bring in expertise from elsewhere.

At the end of the day it’s a tough decision which every client has to make and it would be careless to immediately favour a big agency with a big name before exploring the aternatives which small agencies offer.