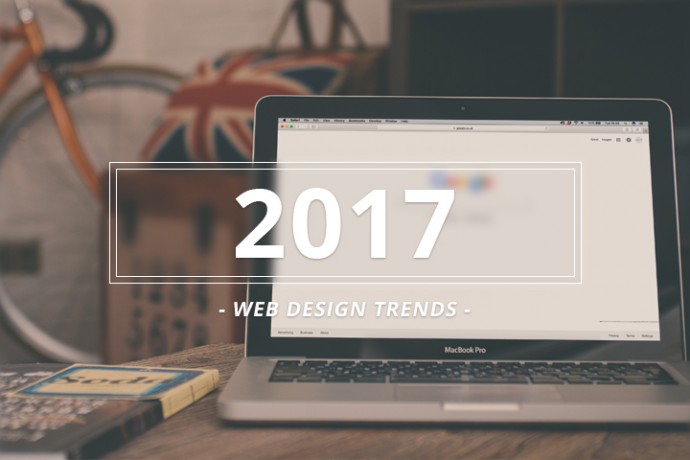 2016 sure did have some dark moments with the loss of Bowie, Cohen and of course Princess Leia but today’s a new day (and year) and with that we’re going to look ahead to figure out what web design trends you can expect to see throughout 2017.

We like to allocate a bit of time at the beginning of each year to do some research and look back through our work from the previous year to see which direction the web design industry is heading. This helps us to analyse any emerging design patterns and trends to keep us ahead of the competition.

Gradients are back! No, not the overused and over exaggerated gradients from the skeuomorphic days but subtle two-tone gradients which help to add a touch of vibrancy and highlight a company’s brand. We’re already seeing a steady growth in the use of gradients, with many big name companies such as Spotify and Stripe already implementing them, and we’re expecting this to continue as we progress throughout the year and see more adoption. It may come as no surprise that more and more users are now accessing the web through their mobile phones rather than their desktops. This means that complicated navigation menus need to be revised and simplified to allow users to easily access and navigate their way through a website with minimal effort. Many websites are now either stripping back their navigation menu to just 4 or 5 items, or simply sticking with the hamburger menu icon across all devices (including desktop).

There’s been much debate over the past few years as to whether web design has lost it’s soul. This is mainly thanks to the explosion of responsive websites and flat web design which has left many websites looking the same. However, we’re predicating 2017 to be the year of change! We’re expecting more web designers to draw inspiration from the traditional design trends of the print industry by experimenting with complicated layouts which break free from the typical ‘boxy’ websites we’ve become accustomed to. Think bold typography and layered elements!

One of our big predictions for 2017 is that Progressive Web Apps (A.K.A PWAs) will see a lot more traction. If you’re unfamiliar with Progressive Web Apps they’ve been labelled the next generation of online interactivity. In a nutshell they combine the advantages of websites with the advantages and user experience of native mobile apps. Think of it as if a website and an app were to have a baby.

PWAs are able to harness the full ecosystem of the web whilst delivering it in an app like experience through the use of new web APIs and service workers. PWAs also have the advantage of being relatively easy to deploy and maintain which is going to be appealing to many developers. Click here to see a fun example of a progressive web app. If you’d like to know more about Progressive Web Apps stay tuned as we’ll be releasing a dedicated article about them over the coming months.

Over the past few years we’ve steadily seen the adoption of Javascript libraries and frameworks such as React.js, Vue and Angular grow significantly, whilst the use and dependency on jQuery has declined. We’re expecting this to continue throughout 2017 as more and more web developers choose to build lightweight and scalable programs which are manageable in real world applications. Also with the new release of ES6, we’re predicating more developers to start fine tuning their vanilla Javascript abilities in preparation to tackle whatever framework is thrown at them. We’re anticipating 2017 to be the fall of jQuery as more web developers come to realise its bulkiness and performance issues can be easily avoided.

As with most creative industries it’s hard to pinpoint every upcoming trend, but we believe the ones we’ve mentioned above are sure to see a wide adoption throughout 2017. The important thing when analysing the web design industry, and creating websites in general, is to focus on the user experience rather than implementing things just because they’re trendy.

If you’d like any further help and advice regarding web design or digital marketing, please don’t hesitate to get in touch.